In a study of 794 patients aged 18 to 89 years who underwent radical nephroureterectomy with lymph node dissection for nonmetastatic UTUC with lymph node involvement, Dr Gershman and his colleagues found that patients had 1-, 5-, and 8-year overall survival rates of 63.7%, 24.2%, and 18.7%, respectively.

The median follow-up period among survivors was 39.5 months, during which 555 patients (70%) died.

Based on these risk factors, Dr Gershman and his collaborators from Brown University in Providence, Rhode Island, and University of Colorado Anschutz Medical Center in Aurora, constructed a risk score for predicting survival, with points added for each feature (1 point each for age 60-79 and 80 years or more, tumor size greater than 10 cm, the presence of more than 2 positive lymph nodes, pT3 tumors, and positive surgical margins, and 2 points for pT4 tumors). The predicted probabilities of 5-year overall survival were 44%, 16%, and 12% for risk scores of 2 or less, 3, and 4 or more points, respectively.

The study also found that patients who received adjuvant chemotherapy had a significant 46% decreased risk of death compared with those who did not. “Although adjuvant chemotherapy appears to be associated with improved survival in UTUC, utilization rates of neoadjuvant chemotherapy remain low in this patient population,” the authors concluded. “Clinicopathologic predictors of poor survival after surgical resection may improve risk-stratification, counseling, and selection of patients for multimodal management.” 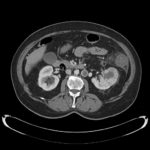 Guideline-Based Hematuria Evaluation May Up Risk of Secondary Cancers