In a move that is guaranteed to cause some controversy, the American Society of Breast Surgeons (ASBrS) released a consensus guideline recommending that all patients who have been diagnosed with breast cancer be offered genetic testing. They noted that even patients without a history of breast cancer should be considered for testing if they desire such testing (provided that they meet the guidelines for testing according to the National Comprehensive Cancer Network [NCCN]) with “careful pretest counseling to explain the limited value of ‘uninformative negative’ results,” they wrote.1

If hereditary pathogenic mutations are found, the guideline noted, only certain mutations may lead to actionable clinical decisions. For example, risk-reducing, prophylactic mastectomy should only be considered in mutations discovered in BRCA1, BRCA2, PTEN, and TP53. And if a TP53 mutation is discovered, physicians can avoid radiation for patients, as those who have this mutation are predisposed to radiation-induced secondary cancers, the group noted.

But for mutations that would not prompt risk-reducing surgeries, the information from genetic testing could still guide oncologists about whether to employ chemoprevention or enhanced screening, despite the fact that the group also acknowledged that not all pathogenic variants are “medically actionable.”

In the absence of a strong medical history suggesting breast cancer is likely, patients with mutations in ATM, CDH1, CHEK2, NBN, NF1, PALB2, and STK11 should receive enhanced screening, including annual screening of mammography with tomosynthesis and breast MRI, but the data are not sufficient to support risk-reducing mastectomy.

No risk management efforts should be undertaken for mutations found in BARD1, MSH2, MLH1, MSH6, PMS2, EPCAM, BRIP1, RAD51C, RAD51D, according to the consortium, although mutations in some of the aforementioned genes could signal further disposition to gynecological cancers and Lynch syndrome. And, variants of uncertain significance should be considered inconclusive at this point, the letter stated.

Access to a genetic counselor is a key part of the group’s recommendation, which they say is a crucial part of interpreting the results if more people are to get tested. They noted that both pretest and posttest counseling will be important elements of any expansion to testing.

The group mentioned the limitations of current testing tools, and warned that the risk of false negatives and positives is a real concern. The presence of a mutation can be valuable to assess, but the penetrance of the cancer risk associated with that mutation is also important to consider.

However, even though many breast cancer specialists acknowledge expanded testing may be beneficial, they also note that unless NCCN explicitly includes universal genetic testing for patients affected by breast cancer (both directly and indirectly), the testing will not be covered by insurers.2

Much of the existing information about common breast cancer mutations has the potential to be biased, as individuals of European descent make up much of the genetic information that was used to build reference genomes.3 The authors appeared to recognize this gap in knowledge by stating that “[o]ther potential issues of testing should also be reviewed, such as inconclusive results, misperception of true risk, and discrimination.” Despite this, the authors still mention incorporating multigene panel testing (as opposed to whole-genome sequencing) as a way insurance companies can incorporate testing more easily for high-risk patients.

The ASBrS consensus statement was developed under the direction of and approved by their Board of Directors. “This is not an exhaustive systematic review, but a comprehensive review of the most impactful evidence in the modern literature on this subject,” they wrote. “Genetic testing to assess hereditary risk of cancer is a broad and dynamic area of medical research. The dominant focus of this guideline is limited in scope to breast cancer. Similar guidelines have been previously put forth from this body in 2006, 2012, 2016, and 2017.”

Disclosure: A number of guideline authors disclosed potential conflicts of interest. For a complete list of disclosures, please refer to the original guideline.1 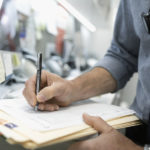