Daily aspirin use did not improve invasive disease-free survival (iDFS) in patients with HER2-negative breast cancer, according to results of the phase 3 Aspirin after Breast Cancer (ABC) trial.

The results were presented at the American Society of Clinical Oncology (ASCO) Virtual Plenary Series by Wendy Y. Chen, MD, of Dana-Farber Cancer Institute in Boston.

Dr Chen discussed evidence that provided a strong rationale for conducting the ABC trial. First, in vitro and animal data showed that aspirin and other non-steroidal anti-inflammatory drugs (NSAIDs) can decrease breast cancer growth and invasion.

The study enrolled 3021 patients with node-positive or high-risk node-negative, HER2-negative breast cancer who were younger than 70 years of age. The patients were randomly assigned 1:1 to receive 300 mg of aspirin (1511 patients) or placebo (1510 patients) daily for 5 years.

Baseline characteristics were well balanced between the arms and representative of the US breast cancer population, Dr Chen said. Overall, 18.8% of patients were premenopausal, 11.0% had hormone-receptor negative disease, 85.7% were node-positive, and 83.3% had received chemotherapy.

The trial was stopped early because the prespecified futility boundary was crossed. The median follow-up was 24 months, and the median time on treatment was 18 months. Compliance was similar between the arms, as was off-protocol use of aspirin or NSAIDs.

“[T]here was a numerically higher number of events in the aspirin arm,” Dr Chen noted. “Therefore, it was unlikely, even with further follow-up, that there would be any benefit associated with aspirin.”

Dr Chen noted that there were no grade 4 hematologic, gastrointestinal, or cardiac AEs in the aspirin arm.

ABC was a well-designed, well-conducted trial, according to ASCO discussant Angela DeMichele, MD, of Abramson Cancer Center at the University of Pennsylvania in Philadelphia.

She added that the researchers enrolled the “right” study population for the mechanism of the intervention, and there was adequate administration of the study drug, with minimal contamination of off-study aspirin or NSAID use.

Still, the trial was stopped early for futility, and the results suggest it’s unlikely that longer follow-up would show a benefit with aspirin. In fact, Dr DeMichele said, we cannot rule out the possibility that aspirin might increase breast cancer recurrence.

“So what can we take home from this study?” Dr DeMichele asked. “At this time, aspirin should not be used simply to prevent breast cancer recurrence. Decisions about aspirin use for other indications should definitely include an individualized risk-benefit discussion between physician and patient.” 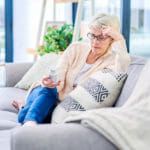