The Oncotype DX test has been lauded for offering a quantifiable measure for whether patients with early-stage breast cancer will benefit from chemotherapy and what their risk of recurrence is. But researchers at Vanderbilt University School of Medicine have found that there’s one demographic for whom the test doesn’t work as well, under its current guidelines: men.1

Because men account for less than 1% of all breast cancer diagnoses,2 most breast cancer research has focused on women — but this has led to the use of diagnostic tools that may not actually work the same way in men, who in turn, have a higher mortality rate3 than women with breast cancer. Most often, women have historically been the ones experiencing this mismatch in diagnostic tools — for example, heart disease has primarily been studied in men, leading to a gap in knowledge about how heart disease manifests in women. As a result, many women with heart disease are misdiagnosed.4

“Because it is rare for a man to have breast cancer, the outcome for breast cancer is really under-investigated in men,” said Fei Wang, MD, PhD, a visiting research fellow at Vanderbilt University who is also lead author on the study. “That’s one of the reasons we wanted to study it and see whether the prognostic factors for male breast cancer are the same or differ from the female breast cancer patients.”

Oncotype DX is a test that evaluates 21 genetic markers in patients with estrogen receptor-positive, but node-negative, breast cancer to generate what’s called a “recurrence score” (RS). The RS, a number between 0 and 100, can be used not only to determine the best course of treatment for early-stage breast cancer, but also to evaluate the likelihood of mortality for the patient. It’s generally been understood that mortality begins to increase with an RS of 23 or above. 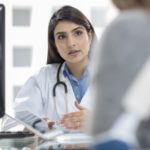