(HealthDay News) — For patients undergoing nipple-sparing mastectomy, overall breast cancer recurrence rates are low at a median follow-up of 10 years, according to a study published in the October issue of Plastic and Reconstructive Surgery.

Multifocal or multicentric disease was present in 31.0% of nipple-sparing mastectomy specimens, and lymphovascular invasion was present in 10.3%. In 84.9% of nipple-sparing mastectomies, sentinel lymph node biopsy was performed, and 17.8% were positive. The rates of positive frozen subareolar biopsy and permanent subareolar pathology were 7.3% and 9.5%, respectively. Pathologic tumor stages were most frequently stage I and stage 0 (44.6% and 33.9%, respectively).

The incidence of recurrent disease was 3.17% per mastectomy and 3.33% per patient. No demographic, operative, or tumor-specific variables were independent risk factors for locoregional recurrence in a univariate analysis. 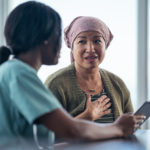