In oncology, PARP inhibitors are approved for various malignancies that harbor BRCA mutations, including triple-negative breast cancer (TNBC). Though the benefit of PARP inhibition in this genomically specific patient population has been well established in the TNBC setting, the strategy has been associated with high rates of relapse.

“For patients with this mutation, these drugs are tremendously beneficial,” said Jennifer Guerriero, PhD, director of the Breast Immunology Laboratory in the Women’s Cancer Program at the Dana-Farber Cancer Institute in Boston, Massachusetts. “Unfortunately, the majority of patients do relapse and after relapse, there are not a lot of options for them.”

There is currently a lot of optimism that coadministering PARP inhibition with immunotherapy, specifically checkpoint inhibitors, is a way to boost responses in this relapse-prone patient population, according to Guerriero. Dana-Farber investigators recently opened a national trial to investigate the efficacy of this combination in patients with genetic mutations sensitive to PARP inhibition.

However, Guerriero and colleagues are also actively exploring other combination approaches to harness the immune system with PARP inhibitors, and macrophages, a type of immune cell found in tumors, may hold promise.

“Macrophages see tumors as wounds and go to the tumor site to try to repair the tissue,” Guerriero explained. “Macrophages are only doing what they are supposed to do, but that leads to growth of the tumor and eventually metastasis.”

Indeed, Brian Ruffell, PhD, of the department of immunology at the H. Lee Moffitt Cancer Center and Research Institute in Tampa, Florida, described macrophages as the “bad actors” in tumors.

“The role of macrophages in the context of immunotherapy is usually one of being a suppressive population,” Ruffell said. “If we are able to target macrophages and get rid of them, we normally see increased T-cell activation.”

In a recent study published in Nature Cancer, Guerriero and colleagues were able to demonstrate that macrophages were the predominant infiltrating immune cell type in BRCA-associated TNBC, and that BRCA-associated disease had significantly more macrophages than BRCA-wild type TNBC.1

“What we didn’t expect to find was that PARP inhibitors make macrophages even more suppressive,” Guerriero said.

The study tested the effects of the PARP inhibitor olaparib on the tumor microenvironment and found that it induced substantial changes. Specifically, the drug enhanced both antitumor and pro-tumor features of macrophages.

“If you take macrophages and treat [them] with a PARP inhibitor in a cell culture dish, the macrophages become highly suppressive, and we found they can not only inhibit T cells, but actually kill the T cells,” Guerriero said. “That is detrimental to the whole concept of immunotherapy and achieving long-term protection against cancer.”

In theory, if immunotherapy with checkpoint inhibitors can further augment responses to PARP inhibition in TNBC, then the benefit could only be made greater by removing suppressive macrophages, she said.

Screening cancer types to see if there is a high infiltration of macrophages could help identify where macrophages have a more functional role, according to Ruffell. “It is not a guarantee, but it is a decent way to look for something to target,” he said. 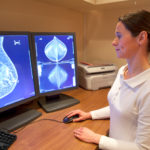 Digital Breast Tomosynthesis Decreases Rate of False Positives, But Does Not Improve Detection of Recurrence