A 69-year-old woman presents to the clinic with complaints of a large right breast mass that has grown rapidly over the past 2 weeks.

The patient reports she was in the shower conducting a routine breast self-examination when she noticed a firm, nontender, moveable hard mass. She states there was no nipple discharge.

The mass has greatly increased in size since first being felt just a couple of weeks ago and is palpable at the 10-o’clock position. The patient reports she previously had several “breast cysts” so she was not overly concerned until this mass grew at an alarming rate.

The patient has a history of diabetes, hypertension, hypothyroidism, diverticulitis, osteoarthritis, glaucoma, migraines, rheumatic heart disease with murmur, breast cysts, and breast adenomas. The patient breastfed her 2 children. The patient has glaucoma and recently underwent a failed eye stent procedure that resulted in 95% blindness in her left eye.

The patient is allergic to morphine and hydromorphone, which caused migraines; prochlorperazine caused angioedema. She is up to date on all immunizations and annual screenings. She is a nonsmoker, rarely drinks alcohol, and follows a diabetes-friendly diet.

On presentation, the patient appears well but anxious (Table 1). The patient’s HEENT (head, eyes, ears, nose, and throat) examination is unremarkable except for a cloudy right pupil. Lungs are clear anteriorly and posteriorly. Her heart has regular rhythm and rate with soft murmur grade (grade I/VI) audible at the midclavicular line fifth intercostal space. Right breast has a firm, movable mass at the 10-o’clock position measuring 10 cm × 10 cm. No nipple retraction from either breast or peau d’orange appearance is noted; positive retraction of the mass is observed but no further breast abnormality.

Phyllodes tumor of the breast, or cystosarcoma phyllodes, are rare tumors that begin in the stromal tissue of the breast.1 They make up 0.3% to 1% of all breast tumors.2 Phyllodes tumors generally appear in the fourth or fifth decade of life but can occur at any age.3

Benign phyllodes tumors will appear like fibroadenomas on radiologic and cytologic examination. They are fast growing but rarely spread outside the breast. The underlying cause of phyllodes is unknown.4 Rosen et al first subclassified the tumors histologically as benign, borderline, or malignant according to features such as tumor margins, stromal overgrowth, tumor necrosis, cellular atypia, and number of mitosis per high power field (Table 2).2,5,6 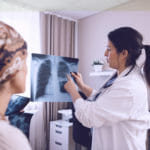 Breast Cancer: How It is Found and the Importance of Early Detection