Radiotherapy (RT) may improve survival outcomes among patients with early-stage breast cancer and detectable circulating tumor cells (CTC), according to a study published in JAMA Oncology.1

Although the presence of CTCs has been established as a prognostic factor for various measures of survival, its value for guiding clinical interventions is not yet fully understood. Researchers hypothesized that CTCs may identify patients who would benefit from adjuvant radiotherapy.

For this cohort study, researchers collected outcomes data of 1697 women with early-stage breast cancer from the National Cancer Database (NCDB) and 1516 women from the phase 3 SUCCESS clinical study. Overall, 399 (23.5%) and 294 (19.4%) patients from the NCDB and SUCCESS study had positive CTC statuses, respectively.

Results showed that there was a significant association between overall survival (OS) and adjuvant RT when factoring in CTC status.

Further analysis revealed that RT prolonged OS among patients from both cohorts who underwent breast-conserving surgery if they had positive-CTCs (P < .001) but not among patients without CTCs (P = .77); no OS benefit was observed with RT among patients post-mastectomy regardless of CTC status.

The findings of this study strongly suggest that CTC status may be predictive of RT benefit among patients with early breast cancer. The authors concluded that “A prospective trial evaluating CTC-based management for RT in early-stage breast cancer merits consideration, with the ultimate goal of refining treatment recommendations to improve clinical outcomes, quality of life, and value of care.” 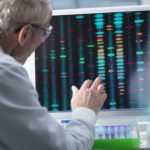