The U.S. Food and Drug Administration (FDA) accepted a New Drug Application for neratinib for the extended treatment of patients with early HER2-positive breast cancer in the adjuvant setting. Neratinib is intended only for patients who received prior adjuvant trastuzumab-based therapy.1

The submission is based on findings from the phase 3 ExteNET study (Study Evaluating The Effects Of Neratinib After Adjuvant Trastuzumab In Women With Early Stage Breast Cancer; ClinicalTrials.gov Identifier: NCT00878709), which were published in The Lancet Oncology in February, 2016.

Among patients with hormone receptor-positive disease, adjuvant treatment with neratinib led to a 49% reduction in the risk of invasive disease recurrence or death versus placebo (hazard ratio, 0.51; P = .001). The 2-year invasive disease-free survival rates among this pre-defined subgroup were 95.4% and 91.2% for neratinib and placebo, respectively.

The most common adverse event in neratinib-treated patients was diarrhea. Patients in the ExteNET trial did not, however, receive prophylactic antidiarrheal agents. 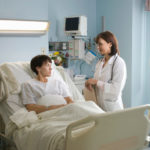 G-CSF Linked With Some Reduction in Neutropenia-related Hospitalization