Identifying gene variants that modulate the risk of cancer toxicities due to radiotherapy would help to better stratify risk and tailor treatment plans to individual patients. Associate Professor Benjamin Smith, MD, and colleagues at the University of Texas MD Anderson Cancer Center in Houston, Texas, published findings in JAMA Oncology from the first prospective validation of a radiotherapy toxicity biomarker, the C-509T variant allele, which is found in the promoter region of the transforming growth factor gene TGFB1.1

Cancer Therapy Advisor asked Dr Smith about the findings and their implications for clinical practice.

Cancer Therapy Advisor (CTA): Thefield of radiosensitivity and radiotoxicity genomics, or ‘radiogenomics’, has been growing. Why did radiation oncologists begin to suspect a strong genetic basis for radiation toxicities?

Dr Smith: Generally, if you have 2 patients with the same tumor type, body type, and radiation plan, one might come in to follow-up appointments and you can’t even tell they’ve undergone radiation — while the other will have a lot of side effects. That led people to ask what’s driving those differences.

At a fundamental level, we know radiotherapy can treat cancer only because normal, healthy cells have this amazing machinery handed down from bacterial ancestors to repair the damage caused by radiation. This machinery stems from the need of bacteria to repair damage caused not only by ionizing radiation but also, more generally, by oxidative stress in the environment. Because radiation works by causing oxidative stress, these pathways prove to be very effective in promoting repair of radiation damage in normal cells. However, given underlying genetic diversity, it is certainly biologically plausible that cells, and, accordingly, people, would manifest variation in the ability to heal from radiation damage, and that this variation would have a genetic component.

CTA: Why did your team decide to validate this gene variant, C-509T, in particular?

Dr Smith: We decided in 2010, as we put together a grant, to incorporate a translational endpoint. The literature at that time wasn’t terribly illuminating, but some research had suggested that this variant in the promotor region for the TGF beta-1 gene might affect radiation toxicity risk. The underlying mechanism was thought to be that patients with this variant secrete higher levels of TGF-beta which has long been thought to be one of the cytokines, or signaling molecules, that promote fibroblasts to lay down collagen. So, it was reasonable to hypothesize these patients might experience more fibrosis after radiotherapy. 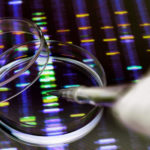