The surface modification of GNP with herceptin was confirmed by UV–vis spectra, as shown in Figure 2. GNPs showed an absorption onset at 386 nm and after herceptin immobilization, they exhibited a red shift to 389 nm.26 This red shift was produced by strong quantum confinement due to the increase in particle size after metal-to-ligand charge transfer.27,28

The surface modification of GNP with herceptin was also confirmed by FT-IR, as displayed in Figure 3. In the case of the GNP spectrum, the introduction of MSA on the surface of GNP was confirmed by the characteristic peak at 1,700 cm−1 and 3,500 cm−1 (Figure 3A), which can be attributed to the free carboxyl (−COOH) and hydroxyl (−OH) groups.26,29

After the reaction of the free amine groups of GNP with herceptin, absorption at 1,648 cm−1 and 1,540 cm−1 appeared, due to the amide groups of GNP–Her, proving the effective immobilization of herceptin over the GNPs. The larger particle size and nonaggregated particle morphology was attributed to the conjugation of herceptin on the surface of the GNP.

Figure 5 shows the typical sizes and size distributions of the synthesized GNPs and GNP–Her conjugates measured by DLS. The mean size of the GNPs, as determined by DLS, was ~29 nm. On the other hand, the mean size of GNP–Her was almost ~82 nm.

The synthesis of Cy5 dye-immobilized GNP–Her was also confirmed by UV–vis absorption spectroscopy, as shown in Figure 6. The Cy5 dye-immobilized GNP–Her showed an absorption onset at 263 nm (Figure 6B) and after Cy5 dye immobilization, it exhibited a red shift to 680 nm (Figure 6A). This red shift was caused due to the increase in particle diameter.28 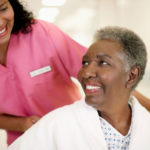