Adding pembrolizumab to chemotherapy can significantly improve overall survival (OS) in patients with triple-negative breast cancer (TNBC) and high PD-L1 expression, according to final results from the KEYNOTE-355 study.

Patients with a PD-L1 combined positive score (CPS) of 10 or higher had a significant improvement in OS with pembrolizumab. These results were published in The New England Journal of Medicine.

The researchers noted that a prior analysis from this trial showed that patients with a PD-L1 CPS of 10 or higher had a significant improvement in progression-free survival with pembrolizumab.

Therefore, the current analysis “provides further support that a CPS of 10 or more is an appropriate criterion to define the population of patients with advanced triple-negative breast cancer who would be expected to derive benefit from pembrolizumab plus chemotherapy,” the researchers concluded.

Disclosures: This research was supported by Merck Sharp and Dohme. Some study authors declared affiliations with biotech, pharmaceutical, and/or device companies. Please see the original reference for a full list of disclosures. 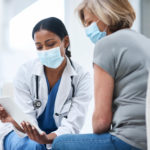