The unlikely combination of Angelina Jolie and the US Supreme Court has recently brought intense focus on the implications of carrying BRCA1/2 gene mutations and the appropriate use and availability of BRCA genetic testing.

Although generally thought of in the context of women’s breast cancer risk, BRCA1 and BRCA2 mutations can be deleterious and also convey higher risks for cancer in both men and women.1 BRCA1 and BRCA2 also increase the risk for  ovarian cancer in women—collectively known as hereditary breast and ovarian cancer, or HBOC—and for pancreatic cancer and melanoma in both men and women.1 Men who carry BRCA mutations are also at increased risk for male breast cancer and have a two- to five-times higher risk for an aggressive form of prostate cancer.1

With this renewed attention, the topic of BRCA1/2 mutations is being revisited, especially in the context of HBOC risk. BRCA-associated cancers are hereditary and are commonly characterized by an autosomal dominant inheritance pattern; within families that have a history of breast and ovarian cancer, more than 90% of early-onset breast cancer and 5% to 10% of ovarian cancer is related to BRCA1/2 mutations. Individuals with a BRCA1/2 mutation usually are of a younger age at disease onset.1

The overall prevalence of cancer-linked mutations is higher for BRCA1 (one in 300) than for BRCA2 (one in 800), although hundreds of mutations within each gene have been identified.1 The genes, located on chromosomes 17 (BRCA1) and 13 (BRCA2), encode tumor suppression proteins and are believed to be involved in DNA repair.1 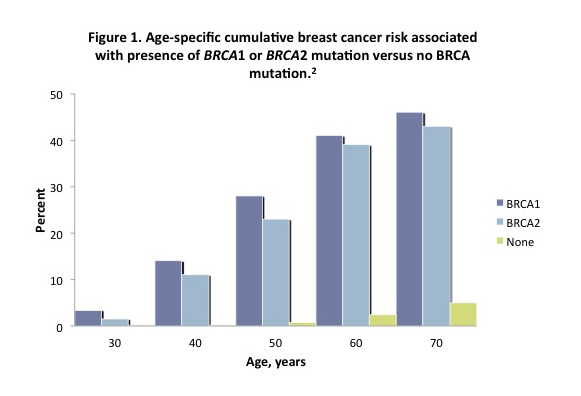 A similar pattern was seen with BRCA2. At the same time, RR for ovarian cancer had a much smaller range and was highest—about 65—in midlife and lower in the youngest and oldest decades studied (Figure 2).2  This finding may hold relevance for decision-making when genetic testing reveals BRCA1/2 mutations in an older woman with no personal history of cancer.

Compared with non-BRCA tumors, BRCA-associated breast cancer occurs at younger ages and is more likely to be hormone- and HER2-negative (ie, triple-negative [TNBC]), with associated implications for prognosis and treatment options. Incidence of TNBC that is BRCA-related ranges from 11% to 28%, and tends to be diagnosed at younger ages than non-BRCA TNBC.1  The opposite appears to be the case for ovarian cancer; based on limited  evidence from a large pooled analysis of observational studies, BRCA1/2 carriers with invasive ovarian cancer may have better prognosis and longer survival times than those not carrying the mutations.1,3  Additional studies and research is needed to validate the results of this analysis. 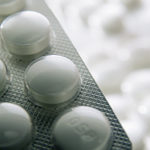 Effect of Metformin on Breast Cancer Mortality Is Still Uncertain