Patients with advanced breast cancer and germline mutations in BRCA1/2 gained a significant progression-free survival (PFS) benefit from treatment with the single-agent poly(adenosine diphosphate–ribose) polymerase (PARP) inhibitor talazoparib compared with standard chemotherapy, according to the results of the EMBRACA trial published in The New England Journal of Medicine.1

“The EMBRACA study was a randomized phase 3 trial comparing once-daily talazoparib to several options of standard chemotherapies, and was found to have improved progression-free survival as well as improved patient-reported outcomes when compared [with] the chemotherapies in patients with inherited BRCA mutations,” said Jennifer Litton, MD, associate professor, the University of Texas MD Anderson Cancer Center, Houston.

In cancer cells with mutations in BRCA1/2, use of PARP inhibitors causes cell death as a result of the accumulation of irreversible DNA damage. Talazoparib is a once-daily oral PARP inhibitor that has been shown to be very potent in early trials.

The open-label EMBRACA trial included 431 patients with advanced disease and germline BRCA1/2 mutations who were randomly assigned 2:1 to talazoparib or physician’s choice of standard single-agent chemotherapy. The primary end point was PFS.

In a 2017 study of another oral PARP inhibitor, olaparib, PARP blockade resulted in an almost 3-month improvement of PFS, with the risk for progression or death lowered by 42% among patients assigned the drug.2 However, Dr Litton and colleagues wrote that the EMBRACA trial included patients with locally advanced disease and had a lower proportion of patients with an Eastern Cooperative Oncology Group (ECOG) status of 0 compared with the OlympiAD trial (53.3% vs 72.2%, respectively). 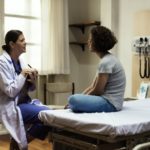