In addition to genetic alterations characterized by changes in the coding sequence of DNA, epigenetic changes to DNA, such as methylation of cytosine bases that are sequentially followed by guanine (ie, CpG dinucelotides), can be involved in the regulation of gene expression, such as tumor suppressor gene silencing.

In addition to genomic profiling, there is growing evidence that DNA methylation profiling can be useful in predicting prognoses for subgroups of patients with early-stage CLL. Furthermore, results of recent studies have also demonstrated that the presence of intraclonal genetic heterogeneity in CLL, as determined by somatic mutations in the gene encoding for the variable region of the immunoglobulin heavy chain (IGHV), is associated with disease evolution and a more aggressive disease course.

While coevolution of somatic epigenetic alterations with somatic genetic alterations has also been identified in CLL, less is known about whether specific patterns in these alterations are associated with shorter remission periods following treatment, and whether genetic and/or epigenetic heterogeneity is correlated with the birth rate (BR; new cells per day) of leukemic cells in subpopulations of patients with disease defined by the presence or absence of known prognostic biomarkers.

In this study, peripheral blood specimens were obtained from a subgroup of 21 patients with untreated, early-stage CLL who had previously been enrolled in another study which evaluated the BR of leukemic cells as a potential biomarker for disease progression. In addition to BR, data on clinical outcomes, as well as the status of some established biomarkers, were also available for these patients.

Previous research involved in uncovering and quantifying particular CLL cell surface markers has identified fractions of intraclonal subpopulations of circulating CLL cells defined as proliferative (PF; CXCR4-dim, CD5-bright), intermediate (IF), or resting (RF; CXCR4-bright, CD5-dim), with the former fraction believed to represent leukemic cells that had divided and entered the circulation in the recent past, whereas the latter fraction may possibly represent older cells that are migrating back to lymphoid tissues.

Following antibody staining, cells were sorted and cellular DNA and RNA were extracted for DNA methylation analysis and gene-expression profiling.

CLL cells were also dichotomized according to the presence or absence of somatic mutations in IGHV-unmutated–CLL (U-CLL) and mutated-CLL (M-CLL), with a preponderance of U-CLL cells previously associated with more aggressive disease.

Some of the key findings from this study of 13 patients with M-CLL and 8 patients with U-CLL included the observation that BR was not associated with DNA methylation levels of circulating CLL fractions independent of IGHV status. Rather, dominant DNA methylation patterns in the PF, IF, and RF were identified in M-CLL and U-CLL that were “largely associated with the mutation status of the immunoglobulin heavy chain locus (IGHV) and their origins from distinct stages of differentiation of antigen-experienced B cells,” the study authors noted.

More specifically, the study authors concluded that these results suggested that “the rate of proliferation and physical egression out of the lymphoid niche into the bloodstream have a limited impact on the methylome of the CLL cell.”

However, also observed was significantly higher variance in DNA methylation patterns in the RF of both U-CLL and M-CLL, but particularly in the U-CLL, compared with the PF, “suggesting that DNA methylation heterogeneity further accumulates as cells age in the circulation without dividing.”

Regarding these observations, the study authors noted that “the PF seems epigenetically more homogeneous, with additional aging-related epigenetic changes acquired either as the cell divides just before entering the circulation or in circulation and that might then be carried back into the next round of reborn PF cells.”

“These findings highlight the importance of further research and exploration of therapeutic strategies for targeting the PF while accelerating the senescence and death of the RF to block the reentrance of CLL resting cells into a new life cycle,” the study authors wrote in concluding remarks. 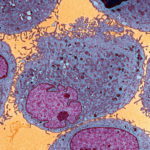