The final analysis of the phase 3b GREEN trial confirmed the toxicity profile of obinutuzumab among patients with newly diagnosed or previously treated chronic lymphocytic leukemia (CLL), according to a report published in the British Journal of Haematology.

After the approval of obinutuzumab, regulatory authorities mandated the GREEN trial. The primary analysis of the GREEN trial (ClinicalTrials.gov Identifier: NCT01905943) demonstrated that obinutuzumab had a manageable toxicity profile as monotherapy or in combination with chemotherapy among patients with or without previous treatment for CLL. The final analysis includes an additional 18 months of follow-up, for a total median of 40 to 50 months among treatment groups.

The open-label, nonrandomized, phase 3b GREEN safety trial evaluated 972 patients with CLL treated with obinutuzumab monotherapy or obinutuzumab plus chlorambucil, bendamustine, or fludarabine and cyclophosphamide (FC). The study was not designed to be comparative; there was neither power calculation nor formal statistical testing performed.

Grade ≥3 adverse events occurred among 82.7% of previously untreated and 84.5% of previously treated patients, with the most common including neutropenia, thrombocytopenia, anemia, and pneumonia. Serious adverse events occurred among 58.1% and 62.5% of patients without or with prior therapy, respectively, with the most common including pneumonia and neutropenia.

Adverse events were attributed to 12% of death, including 8.9% among patients who were previously untreated and 17.9% among those previously treated. The most common reason for death was pneumonia.

Median progression-free survival was 30.2 months with obinutuzumab monotherapy, and 31.8 months, 58.0 months, and not yet reached in the obinutuzumab plus chlorambucil, bendamustine, or FC groups, respectively.

The authors concluded that “this final analysis of the GREEN study supports obinutuzumab plus chemotherapy, beyond the approved obinutuzumab-chlorambucil regimen, as a promising treatment option in both first-line and relapsed/refractory CLL, irrespective of the partner chemotherapy.” 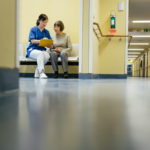