More than 80% of medically fit patients with previously untreated chronic lymphocytic leukemia (CLL) who received 9 months of induction therapy with obinutuzumab plus ibrutinib followed by an additional 6 months of therapy with either ibrutinib alone or chemoimmunotherapy — depending on whether or not a complete remission (CR) characterized by minimal residual disease (MRD) in the bone marrow was achieved —  showed an MRD of 0.01% or less in peripheral blood at 3 years from initiation of treatment, according to results of long-term follow-up of a phase 2 trial published in Blood.1

A number of recent approaches for the initial treatment of patients with CLL have focused on the use of regimens that are chemotherapy-free and/or of limited duration as a means of sparing patients from at least some of the adverse effects of standard chemoimmunotherapy, such as the combination of fludarabine, cyclophosphamide, and rituximab, as well as some targeted therapies.

Previously reported results from this 2-part, single-arm, multicenter, phase 2 trial of treatment-naive, adult patients with CLL not characterized by 17p deletion or a mutation in TP53, and with an Eastern Cooperative Oncology Group (ECOG) performance status of 0 or 1 (ICLL-07 FILO; ClinicalTrials.gov Identifier: NCT02666898) demonstrated the safety of an approach involving 9 months of chemotherapy-free induction therapy with the combination of obinutuzumab, an anti-CD20 monoclonal antibody, and ibrutinib, a Bruxton tyrosine kinase inhibitor, followed by 6 months of treatment with either chemoimmunotherapy with fludarabine, cyclophosphamide, obinutizumab, and ibrutinib or ibrutinib alone, selected based on the MRD status in the bone marrow.2

Furthermore, whereas only 7.7% of the 130 evaluable patients achieved a CR with MRD less than 0.01% in the bone marrow following 9 months of induction therapy with obinutuzumab plus ibrutinib, more than 60% of patients achieved this primary outcome benchmark after 15 months of MRD-driven, fixed-duration treatment.2

Of note, at 40 months following study inclusion, the MRD rate in peripheral blood above 0.01% was 8.1% and 42.9% in evaluable patients receiving postinduction therapy with chemoimmunotherapy plus ibrutinib or ibrutinib alone, respectively.1

The 3-year rate of progression-free survival (PFS) in the overall evaluable patient cohort was 95.7%, with a corresponding 3-year overall survival (OS) rate of 97.7%.1

These findings were reported to compare favorably with results obtained following treatment discontinuation in other studies of either ibrutinib-containing regimens or the combination of the BCL2 inhibitor, venetoclax, and obinutuzumab, in patients with previously untreated CLL.

Regarding the long-term toxicity of this approach, grade 3/4 adverse effects reported following the end of treatment included neutropenia (18%), lymphopenia (4%), infections (1.5%), and cardiac events (2.3%). In addition, 2 patients developed secondary cancers, although this rate was reported to be similar to that observed in other studies of first-line, fixed-duration, targeted therapy-based treatment approaches in CLL.  No new safety signals were observed following treatment cessation. 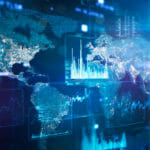