Chronic lymphocytic leukemia (CLL), a cancer of the immune system that impairs immune competence, can leave patients vulnerable to infection.1,2 Hypogammaglobulinemia and associated respiratory bacterial infections are common even before CLL treatment is initiated.3 Historically, furthermore, infections have been the leading cause of death in this patient population.4

The mechanisms of CLL-associated immune dysfunction are complex but appear to include aberrant phagocytic enzymes, T cells, natural killer cells, and dendritic cells. Immunization against influenza and pneumococcus appears to be less effective among patients with CLL than others because of impaired antibody production, but annual influenza vaccination is nevertheless recommended for these patients. Live attenuated vaccines are, however, contraindicated for most patients.

Immunosuppressive therapies for CLL further increase the risk of infection. The risk of bacterial infections and herpes virus reactivation climbs following intensive chemotherapy with purine analogues/alkylating agent combination chemotherapy — and with chemoimmunotherapy regimens — with patients facing heightened risk of these sequelae for up to 2 years after treatment.2 Phase 3 clinical trials suggest that purine analogues may cause grade 3 or higher infection rates in upwards of 40% of patients.

It was hoped that, with the advent of targeted therapies, these patients might be at a dramatically reduced risk of opportunistic infection.

Instead, the spectrum of high-risk infections might be shifting from predominantly bacterial illnesses to predominantly opportunistic fungal infections — and, less frequently, life-threatening viral infection.2 Rituximab and alemtuzumab are linked to very rare but fatal brain infections triggered by reactivation of latent John Cunningham polyomavirus (JC virus). Alemtuzumab is highly immunosuppressive, and also appears to increase the risk of cytomegalovirus reactivation and fungal Cryptococcus neoformans and Pneumocystis jirovecii infections.2,4

In a recent review published in Blood Reviews, researchers at the Mayo Clinic in Phoenix, Arizona estimated that up to 10% of patients on ibrutinib have a 10% rate of opportunistic infection, but noted that among randomized phase 3 clinical trial participants receiving ibrutinib, grade 3 or worse infections were seen in up to 24% of patients.1

“This emphasizes the need for greater awareness and a high index of suspicion to make the diagnosis [of infection],” reported the authors.

There is some preclinical evidence that ibrutinib inhibits IL2-inducible T cell kinase (ITK), which is involved in T cell development. 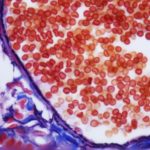 In Focus: Voxtalisib for CLL and B-Cell Lymphomas