Long-term survivors of chronic lymphocytic leukemia (CLL) may be at an increased risk for other cancers compared to the general population, according to a study published in Annals of Oncology.1

Lorenzo Falchi, MD, and fellow researchers from The University of Texas MD Anderson Cancer Center in Houston, TX, looked at 797 patients with CLL who were long-term survivors, defined as having survived for more than 10 years.

Standardized incidence ratios were calculated in order to compare incidence of other cancers in these long-term survivors compared to the general population, with a multivariable model used to identify independent predictors. They also analyzed for overall survival as a function of the presence of other cancers.

The researchers found that cumulative frequency of other cancers was 36%, similar between 570 patients who required treatment for CLL and 227 who remained untreated.

Standardized incidence ratio was 1.2, with a higher incidence among males and patients who were older than 60 years. Independent predictors were found to be advanced age, male gender, and lower platelet counts.

Overall survival was found to be 16.2 months in patients with other cancers, and 22.9 years for those without other cancers. 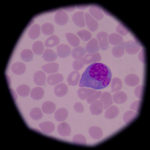