Ibrutinib was approved by the FDA in February 2014 for the treatment of patients with CLL whose disease did not respond to at least one prior therapy.

Ibrutinib is an irreversible Bruton tyrosine kinase (BTK) inhibitor, leading to the decreased activity of downstream signaling events and, ultimately, the proliferation of leukemic cells.4,5

Furthermore, ibrutinib has been shown to suppress the expression adhesion proteins in the bone marrow microenvironment, impairing B-cell homing.6

The efficacy of ibrutinib in relapsed and heavily pretreated patients with CLL was demonstrated in a multicenter, nonrandomized, open-label, phase 1b/2 trial.7

The most common AEs included diarrhea, upper respiratory tract infection, and fatigue. Pneumonia, dehydration, and neutropenia were the most common grade 3 or higher AEs.

The phase 2 RESONATE-17 trial further demonstrated ibrutinib’s efficacy in patients with a 17p deletion.8 In this nonrandomized trial, patients with relapsed CLL or small lymphocytic leukemia (SLL) with a 17p deletion received ibrutinib monotherapy for a median follow-up of 13 months. The 12-month PFS rate was 79.3%, and the median duration of response had not yet been reached.

In July 2015, the FDA approved the use of idelalisib in combination with rituximab in patients with relapsed CLL in whom rituximab monotherapy is considered appropriate due to the presence of comorbidities. Idelalisib specifically and reversibly binds to the p110δ isoform of PI3 kinase (PI3K), reducing the phosphorylation of downstream signaling factors such as Akt. As a result, the tumor microenvironment within the bone marrow and chemokine signaling is disrupted, thereby promoting apoptosis of leukemic cells.9,10

A second interim analysis of the trial demonstrated that the addition of idelalisib improved PFS for patients with unfavorable cytogenetics, including a 17p deletion, TP53 mutation, or ZAP70 positivity.12 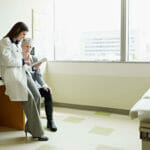 Ibrutinib Not Recommended Over ‘Watch and Wait’ in Asymptomatic, Early CLL