Researchers may have identified the origin of Barrett’s esophagus (BE) and the mechanisms that lead to the development of esophageal adenocarcinoma (EAC), according to research published in Science.

The research suggests that BE originates from the gastric cardia, and EAC arises from undifferentiated BE cells.

“Our results suggest that EAC may derive from gastric cells via a BE-like metaplasia, even though the evolutionary trajectory and prognosis can vary between patients,” the researchers wrote. “Moreover, it is possible that intestinal metaplasia phenotypes, such as BE or gastric intestinal metaplasia, are an indispensable step toward neoplasia.”

The researchers noted that BE is “an archetypal metaplastic condition comprising a mosaic of gastric and intestinal cell types.” BE starts at the gastroesophageal junction (GEJ) and increases the propensity for EAC.

To determine the cell of origin for BE and the mechanisms underlying malignant transformation to EAC, the researchers analyzed GEJ tissues from healthy donors and those with BE.

The team performed single-cell RNA sequencing (scRNA-seq) of 43 samples from 7 different tissue sites across 14 healthy donors and BE patients.

The researchers then investigated the mechanisms underlying the development of BE. They found that 2 genes, c-MYC and HNF4A, were responsible for driving the transcriptional programs of BE cells.

The regulatory roles of c-MYC and HNF4A in BE development were validated in functional studies using organoid cultures from disease-free normal gastric cardia tissues that were transduced with exogenous c-MYC and HNF4A.

“Ectopic expression of c-MYC led to an upregulation of genes characteristic of undifferentiated BE cells, including NCL and LEFTY1, whereas HNF4A led to upregulation of a wider BE gene set comprising FBP1, CLDN3, LEFTY1, TFF3, and particularly CDX2,” the researchers wrote.

“These results demonstrate that ectopic expression of c-MYC and HNF4A in gastric cells drives expression of genes relevant for the BE phenotype,” they added.

The researchers also found evidence to suggest that EAC likely originates from undifferentiated BE cells, regardless of clinical features. The team compared the BE scRNA-seq profiles with bulk RNA sequencing data from 81 esophageal squamous cell carcinoma samples and 321 EAC samples.

The similarity between EAC and BE was “independent of clinical features,” including tumor/node/metastasis stage, Siewert classification, and the presence of adjacent BE, the researchers noted.

“This study provides several orthogonal lines of evidence for a gastric origin for BE, which is likely to be a requisite step for neoplastic progression at this site,” the researchers wrote. “We hope that these data will pave the way for further research and clinical early detection and cancer prevention strategies.” 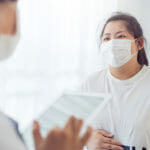 Maternal Obesity May Up CRC Risk in Adult Offspring