A subset of patients with stage III colon cancer had improved survival rates when treated with irinotecan-based therapy, according to a new study in Gastroenterology, the official journal of the American Gastroenterological Association.

CIMP is seen in about 10 to 20 percent of colorectal cancers. Patients with CIMP-negative tumors, however, exhibited significant harm from the addition of irinotecan—overall survival was 68 percent compared with 78 percent for those receiving the standard treatment alone. 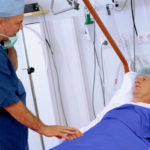