Higher circulating levels of insulin-like growth factor 1 (IGF1) may be associated with colorectal cancer (CRC) risk, according to study results published in Gastroenterology.

IGF1 and insulin-like growth factor-binding protein 3 (IGFBP3) have been associated with the development and progression of many cancers, including CRC. However, many studies examining the relationship between IGF1, IGFBP3, and CRC have been relatively small and had inconsistent results. The objective of this study was to examine the role of circulating IGF1 and IGFBP3 in the development of CRC.

Researchers measured serum levels of IGF1, testosterone, and various other proteins in blood samples collected from 397,380 patients in the UK Biobank — a prospective cohort study that investigated the genetic, lifestyle, and environmental causes of a range of diseases. Data were gathered from 2006 to 2010. Researchers linked to national cancer and death registries to identify cancer cases from this cohort. Complete follow-up was available through March 31, 2016.

There were 2 main limitations. First, levels of IGF1 were measured only one time at baseline and may not have accurately reflected exposure levels across time. Second, the use of summary-level data prevented researchers from investigating nonlinear effects and subgroup analyses by other risk factors including smoking, age, and body mass index.

The researchers concluded that higher circulating levels of IGF1 were associated with a higher risk for CRC and that lifestyle, diet, and/or pharmacological interventions that target the IGF system may help reduce disease risk. 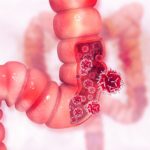