Consumption of red meat, alcohol intake, and other nongenetic risk factors are associated with early-onset colorectal cancer (CRC), according to a study published in JNCI Cancer Spectrum.

In the younger cohort, men and women were equally distributed between the CRC and control groups. Patients with early-onset CRC and control individuals were similar according to age (mean, 45.0 years and 44.7 years, respectively).

In a multivariate analysis, early-onset CRC was significantly associated with the following factors:

None of these risk factors had a greater excess in effect size for early-onset CRC compared with late-onset CRC.

However, a few factors were associated with late-onset CRC but not early-onset CRC — body mass index, smoking history, and lack of aspirin use.

An evaluation of risk factors for early-onset CRC by anatomic subsite revealed that lower intake of dietary fiber was more strongly linked to rectal cancer than to colon cancer (OR, 1.30 vs 1.14; P =.04).

“These results present key insights concerning risk factors that contribute to CRC manifestation in younger individuals, providing a basis for identification of those most at risk, which is imperative in mitigating the rising burden of this disease,” the study authors concluded.

Disclosures: This research was supported by the National Cancer Institute and other organizations. Please see the original reference for a full list of funding sources. The study authors declared no competing interests. 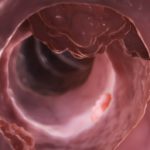