Fecal immunochemical test (FIT)-based screening programs impact both proximal and distal colorectal cancer (CRC) rates, but underlying preexisting epidemiological trends lead to a rapidly increasing percentage of proximal CRC, according to a study published online ahead of print in the journal Cancer.

FIT-based CRC screening programs reduce overall CRC surgery rates, however, data by subset were lacking. The researchers in this study assessed the impact of FIT –based screening on proximal and distal CRC surgical resection rates.

There were three study populations in the trial, all in the Veneto region in Italy. Staggered introduction of FIT-based screening programs were used: early (2002 to 2004), intermediate (2005 to 2007), and late (2008 to 2009). Joinpoint regression analysis and segmented Poisson regression models were used to investigate time series of proximal and distal CRC surgery in the three populations between 2001 and 2012.

After that peak at the time of screening initiation, the trend was reversed and the percentage of proximal CRC surgery rose from 28% in 2001 to 41% in 2012. 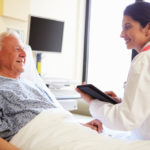