A novel technology senses small changes in the levels of particular compounds in exhaled breath, and accurately identifies changes that signal the development of gastric cancer, according to a study published online in Gut.

The new test uses nanotechnology that analyzes a set of atoms called nanoarrays. In this case, the array includes atoms from breath samples and the computer looks for the amount of specific compounds that are linked to gastric cancer. Nanoarray analysis is accurate, simple, and inexpensive, the researchers said.

Christine Metz, Ph.D., director of the laboratory of medicinal biochemistry at the Feinstein Institute for Medical Research in Manhasset, N.Y., and colleagues collected two breath samples from 484 people, 99 of whom had been diagnosed with gastric cancer but had not yet had chemotherapy or radiation treatments.

The patients were asked about their smoking and drinking habits and tested for infection with Helicobacter pylori.

RELATED: Addition of Cisplatin to Irinotecan Not Effective for Second-Line Gastric Cancer

The findings did not change when the researchers took into account age, alcohol use, and the use of proton pump inhibitors. 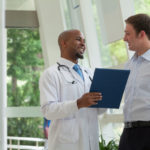