In a massive effort to catalog the molecular causes of stomach cancer, scientists, including researchers from Dana-Farber Cancer Institute, have identified four subtypes of tumors based on shared mutations and other molecular abnormalities. 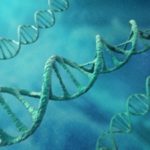