Long-term follow-up of a randomized study comparing preoperative long-course chemoradiation therapy with short-course radiation therapy in patients with locally advanced rectal cancer showed no difference in overall survival (OS) between the 2 groups. The findings from this study were published in Annals of Oncology.1

For patients with locally advanced rectal cancer where the likelihood of a positive surgical margin is high, the standard treatment in the United States typically involves preoperative long-course chemoradiation therapy, which includes approximately 50 Gy of radiation in 25 to 28 fractions with concurrent chemotherapy for 5.5 weeks followed by surgery and adjuvant chemotherapy.2 The overall treatment duration of this regimen is approximately 1 year. A local failure rate of 20% or higher in this patient population, however, has prompted the search for other more effective and less toxic approaches.3

As an alternative, short-course radiation therapy (ie, 25 Gy administered in doses of 5 Gy over 5 days) followed by 3 to 6 months of neoadjuvant chemotherapy and surgery has been evaluated in the setting of locally advanced rectal cancer. Early results from the large, open-label, randomized Polish II study (ClinicalTrials.gov Identifier: NCT00833131) comparing these 2 treatment approaches in patients with cT4 and fixed cT3 rectal cancer showed a significant difference in OS, a secondary study end point, favoring the short-course radiation therapy regimen.3

Specifically, in the phase 3 Polish II study, 515 patients were randomly assigned to receive preoperative treatment with either short-course radiation therapy (5 Gy for 5 days) followed by 3 cycles of FOLFOX4 starting 1 week following completion of radiation therapy (254 patients) or long-course chemoradiation therapy consisting of 50.5 Gy in 1.8 Gy fractions delivered concurrently with 5-day cycles of 5-fluorouracil and leucovorin during the first and fifth weeks of radiation (261 patients). In addition, in the latter regimen, oxaliplatin was administered once a week during radiation therapy on days 1, 8, 15, 22 and 29, although a subsequent protocol amendment allowed for withholding of oxaliplatin in either study arm. Administration of adjuvant chemotherapy was optional in this study, with decisions related to its use made by each treating physician.

At a median follow-up of 7.0 years, a comparison of results for the 2 study arms did not show a significant difference in OS between the 2 study arms (hazard ratio [HR], 0.90; 95% CI, 0.70–1.15; P = .38). Although a 9% benefit in 3-year OS was observed for the short-course regimen, rates of 8-year OS were 49% in both arms. Furthermore, at long-term follow-up, no significant differences were observed between the 2 arms with respect to disease-free survival and rates of local failure, distant metastases, and late complications. 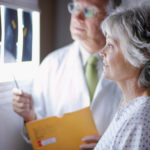 Age Does Not Impact Survival After Transthoracic Esophagectomy, Study Finds