In this study, the authors aim was to examine whether the current human epidemiological research on occupationally inhaled Cr(VI) supports the hypothesis that Cr(VI) is associated with human stomach cancer. The results suggest that Cr(VI) is a stomach carcinogen in humans, which is consistent with the tumour results reported in rodent studies. 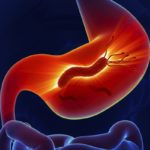