“These results suggest that a predisposition for higher susceptibility to autoimmunity could already exist at baseline, but may be influenced during—and possibly by—the treatment, which is a new finding,” the authors wrote in the paper.

Edward B. Garon, MD, MS, associate professor of medicine at the David Geffen School of Medicine at University of California, Los Angeles, who was not involved in the new research, cautioned that studies like this one may entail a certain bias: “The longer a person is on a drug, the more likely they are to experience toxicity from that drug. So if all you do is look to see whether or not people who experience toxicity [do] better, the answer is frequently ‘yes.’”

However, he also pointed to previous research suggesting that there may indeed be a correlation between toxicities and improved clinical outcomes in patients treated with immunotherapy. For example, a study Dr Garon coauthored, of 97 patients with non–small cell lung cancer treated with pembrolizumab, showed that patients who experienced treatment-related adverse events, including rash, fatigue, and hypothyroidism, had superior objective response rate (ORR; 38.5%), progression-free survival (median, 248 days), and overall survival (median, 493 days), compared with patients who did not (ORR, 8.9%; progression-free survival, median 60 days; overall survival, median 144.5 days).3

“It has been hypothesized that certain patients can be primed to respond to immunotherapy due to heightened baseline ‘immunocompetence,’ and evidence exists to suggest that patients who experience [adverse events] related to immunotherapy are more likely to benefit from therapy,” wrote the authors of that paper.

The new study adds to this research by examining antibodies against the targets leading to thyroid disorders and showing that, in this context, there is a link between autoimmunity and effectiveness of the immunotherapy, Dr Garon said. “The authors did a good job of correcting for some of the biases that are seen in this sort of work,” he said.

It is difficult to say what the new findings may mean specifically to patients who have preexisting thyroid dysfunction, said Dennis Kraus, MD, vice chairman of otolaryngology and director of the Center for Head & Neck Oncology at Lenox Hill Hospital, New York City, who was not involved in the study. “But, to me, what it means is that if we give you several rounds of treatment with immunotherapy, if we see that your thyroid is starting to decline in its function, if you develop antibodies, and your cancer radiographically starts responding to the treatment, then we have identified you as someone who is going to be a good responder and thus, we should continue you on that treatment,” he said. 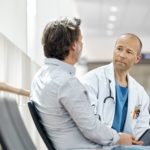