Despite its availability as a risk marker for cardiovascular disease, action is rarely taken to address coronary artery calcification among those who have been treated for cancer with potentially cardiotoxic regimens. This research will be presented at the American College of Cardiology’s 68th Annual Scientific Session & Expo, held March 16-18, 2019 in New Orleans, Louisiana.

This study included 1001 participants who were at least 45 years old (mean 62 years) and who underwent computed tomography (CT) imaging for cancer. Participants were 38% men and were treated with trastuzumab and/or anthracycline. The study researchers examined scans for signs of coronary artery calcification. When identified, the participant’s electronic medical records were examined for reporting of and clinical response to coronary artery calcification. Additionally, information was gathered on rates of statin and aspirin, as well as on cardiologic preventative care for CVD.

The study researchers conclude that “[coronary artery calcification] on cancer CT scans is clinically reported in only 51% of patients. It is rarely acted upon clinically. This incidental and readily available risk marker offers an underrecognized opportunity for action aimed at the primary prevention of [cardiovascular disease] after potentially cardiotoxic cancer treatment.” 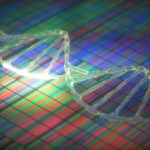 CRISPR–Cas9 Gets a Rebrand: Meet Cas9–gRNA