Tumors frequently evade the immune system at least in part via elevated cell-surface expression of PD-L1, which serves as an “invisibility cloak” for the growing malignancy. Immune checkpoint inhibitors counteract a key mechanism of immune evasion, activating patients’ T cells to recognize and attack tumors. PD-1 inhibitors in particular, including nivolumab and pembrolizumab, are becoming a commonplace approach for treating cancer — though they can lead to significant toxicity.1

But T cell populations are functionally and phenotypically heterogeneous, so the clinical implications are not entirely clear, cautioned the authors of a commentary accompanying the study.3

“This suggests that anti-PD-1 treatment might aggravate disease progression only if it induces proliferation of the specific T-cell subtype that yielded the cancer,” they wrote. 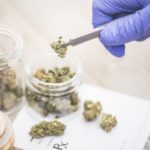 Cannabis for Cancer: An Uncertain Future