This weekly series highlights eponyms in oncology. This week, we explore the history and namesake of the Sister Mary Joseph nodule.

The Sister Mary Joseph Nodule (SMJN) is a palpable cutaneous nodule in the periumbilical area that represents umbilical metastasis.1

SMJNs are generally associated with poor prognosis from widespread intra-abdominal or pelvic disease.1

While serving as a surgical assistant, Sister Mary Joseph noted that a group of patients with gastric cancer had umbilical nodules.1 She also observed that patients with these nodules had advanced cancer and worse prognosis.

She presented her findings to Dr Mayo, who published the observations in the Mayo Clinic Proceedings in 1928. He described the umbilical nodule as “pants-button” umbilicus.

The term “Sister Mary Joseph nodule” was coined a decade after her death. In 1949, Hamilton Bailey, an English surgeon, used the term when describing the nodule in his textbook, Demonstrations of Physical Signs in Clinical Surgery. 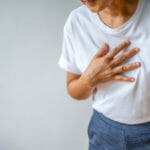