This weekly series highlights eponyms in oncology. This week, we explore the history and namesake of Virchow’s node.

Although Virchow’s node is most commonly described with gastric cancer, it can be seen in other settings as well.2

Virchow’s node has been identified as a seeding location for cancers arising from the intestines, urogenital system, esophagus, common bile duct, liver, pancreas, and lungs. It has been reported with squamous cell carcinoma and lymphoma as well.

Dr Rudolf Virchow is the namesake of Virchow’s node. He was born in 1821 in Prussia (now Poland) and completed his medical education in Berlin in 1843.3

In 1848, Dr Virchow described supraclavicular lymphadenopathy in relation to gastric, ovarian, and pancreatic cancers.4 He recognized Virchow’s node as the terminus for cancers that had spread via the thoracic duct.

“Thus, particularly in cancer of the stomach, the pancreas, the ovaries, etc., the process gradually spreads from the glands of the lower abdomen to the glands in the posterior mediastinum along the ductus thoracicus and finally involves the jugular glands around the junction of the ductus thoracicus (in the left supraclavicular fossa),” Dr Virchow wrote (translated to English).5

In the United States, Virchow’s node is so named because of this description by Dr Virchow. In France, the phenomenon is named “Troisier’s sign” after the French physician Charles Emile Troisier, who reported it in 1889.1,2

Dr Virchow’s other scientific contributions include writing one of the first descriptions of leukemia and coining terms to describe thrombosis and embolism.4

One of his major contributions was ascertaining that all human diseases had a cellular basis.6 Dr Virchow was the first to correctly link the origin of cancers from otherwise normal cells, believing that cancer is caused by severe irritation in the tissues (the “chronic irritation theory”).

Dr Virchow is also credited with founding the newspaper Die medicinische Reform (Medical Reform) and popularizing the term “social medicine.” He promoted the idea that physicians should be advocates for underserved members of their communities.

Dr Virchow died of cardiac failure after a traumatic hip fracture in 1902.6 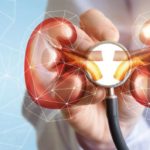