US Food and Drug Administration (FDA) approval of immunotherapies does not eliminate disparities in use, according to research published in JAMA Network Open.

The researchers found that, prior to FDA approval, sociodemographic and socioeconomic characteristics were associated with variable immunotherapy administration by tumor type.

After FDA approval, some of the previously observed disparities were eliminated, but some only narrowed. For example, Hispanic ethnicity was no longer associated with receipt of immunotherapy among patients with melanoma (OR, 1.08; 95% CI, 0.70-1.66; P =.74).

According to the researchers, these results suggest that “FDA approval alone does not ensure the optimal administration of novel treatments in the US.”

Ermer T, Canavan ME, Maduka RC, et al. Association between Food and Drug Administration approval and disparities in immunotherapy use among patients with cancer in the US. JAMA Netw Open. Published online June 30, 2022. doi:10.1001/jamanetworkopen.2022.19535 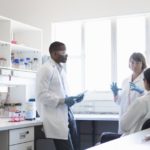