The technology was developed by Philip Low, the Ralph C. Corley Distinguished Professor of Chemistry at Purdue University, director of the Purdue University Center for Drug Discovery and co-founder of On Target Laboratories. 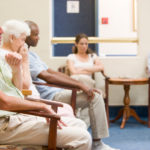