Critical variables for 3 of the highest-volume cancers were not measured under the Oncology Care Model (OCM), which may have penalized oncologists for providing guideline-concordant care, according to researchers. They reported these findings in JCO Oncology Practice.

The researchers noted that the pricing methodology for OCM excluded data on cancer stage and current clinical status. The team therefore sought to determine what effect these data might have within the OCM.

The researchers looked at 15,580 episodes of breast cancer, lung cancer, and multiple myeloma occurring from July 1, 2016, to January 1, 2020, at 7 OCM practices affiliated with academic medical centers. The team merged this clinical data with claims for OCM episodes defined by the Center for Medicare and Medicaid Innovation to identify potential areas of improvement.

The researchers found that a patient’s cancer stage had a significant impact on savings or losses for the practices studied. For breast cancer episodes with complete staging data (n=4751), the overall average loss was $920 per episode, which represents actual spending at 6% higher than the target of $17,208.

According to the researchers, this “aligns with clinical practice because the initial stage determines the appropriate course of treatment for many patients, particularly for a new cancer diagnosis.”

For lung cancer, progressive or recurrent episodes had the greatest average loss, at $15,365 per episode, but this was not significantly different from the average loss for stable episodes, which was $14,993. However, initial diagnoses of lung cancer had significantly fewer losses per episode ($3751; P =.001), as did deaths ($4451; P <.001).

“Current and future value-based care models in oncology can improve the accuracy of their target price methodology by using available clinical data to distinguish between patient complexity within a given cancer type,” the researchers wrote.

“The use of all available, significant data would help distinguish between the clinical differences driving treatment decisions, thus increasing oncologists’ buy-in for value-based care models and their ability to achieve meaningful improvements in the quality and cost of care,” the researchers concluded. 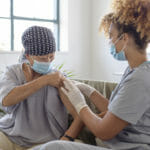