Though the establishment of the national coverage determination (NCD) by the Centers for Medicare & Medicaid Services (CMS) for next-generation sequencing (NGS) in Medicare has largely been seen as a positive step — or, at the very least, as a recognition of the importance of detecting genetic aberrations to inform cancer diagnosis and care — the policy as written could be improved, according to Frank Luh, MD, MS, MHA, CEO of the Sino-American Cancer Foundation in Temple City, California, and Yun Yen, MD, PhD, FACP, president emeritus and chair professor of the Graduate Institute of Medical Informatics at Taipei Medical University, two physicians who recently dissected the final ruling in a JAMA Oncology viewpoint article.1

Cancer Therapy Advisor asked Drs Luh and Yen to elaborate on their view about restricting payer coverage to U.S. Food and Drug Administration (FDA)-approved tests, handling test validation and testing center accountability, and questions about precision medicine that CMS should consider in the future as it pushes toward further enhancing the clinical utility of genomic sequencing.

Cancer Therapy Advisor (CTA): Do you think the restriction to use FDA-approved NGS tests was meant to protect payers from being responsible for the cost of egregious sequencing?

Drs Luh and Yen: There is no doubt that reigning health care costs is a national priority for the United States. The United States spends more per capita on health care than any other nation, substantially outpacing other high-income countries.2 However, despite high health care expenditure, the United States performs poorly in areas such as health outcomes and health care coverage.3 It’s possible that restricting coverage to only FDA-approved NGS tests might control costs and improve price transparency. But we think there are broader issues to consider as to why the CMS policy focused solely on FDA-approved tests.

First, providing coverage for tests only approved by the FDA ensures patient safety. Limiting coverage to FDA-approved tests ensures labs and academic centers adhere to the highest quality and safety standards established by one regulatory body. This also assures patients, providers, payers, and the marketplace that the test is reliably valid both clinically and analytically. Restricting use to FDA-approved NGS tests is not an absolute rule that must last forever. But it’s a good start.

Second, the cost of sequencing a patient’s genome has decreased over time and is expected to drop even more. The National Human Genome Research Institute estimated that the total cost of obtaining a single human-genome sequence in 2001 was $95 million.4 Costs have subsequently dropped exponentially following a trajectory described as Moore’s Law, which predicts a reduction of cost by 50% every two years.5 The recent introduction of NGS technology has also improved efficiency, accuracy, and affordability of sequencing. While whole-genome sequencing remains expensive compared with current laboratory test standards, the National Academies of Science, Engineering, and Medicine projected that the cost to sequence will drop into the range of many routine clinical tests within a few years.6 A recent study that looked at the price of genomic sequencing found that estimates for a single genomic test ranged from $555 to $5169 for whole-exome sequencing and from $1906 to $24,801 for whole-genome sequencing.7 We do not suspect cost of sequencing was a factor in limiting coverage to only FDA-approved NGS tests.

Finally, going back to the issue of centering all NGS tests on the FDA — it’s important to realize that the translation of genomic testing in clinical practice is an ongoing process. It therefore makes sense to start a reimbursement framework that rests on tests validated by the FDA. Payer coverage may move away from the FDA in the future. But for now, it’s important to allow science, research, and data submitted to FDA to guide regulatory policies. As we move forward to accrue and review new scientific evidence about clinical testing and technology, the FDA should work with private and public agencies on revisiting regulatory statutes related to NGS technology (whether it involves payor coverage, clinical validity, or access) and adjust accordingly.

CTA: Are there labs or academic centers that use tests for evidence development incorrectly? In other words, how does test validation play into the use of non-FDA-approved tests or testing methods?

Drs Luh and Yen: While we are not aware of any lab or academic center that specifically used NGS tests with the intention of developing evidence that was not accurate or helpful to patients, your question does raise concerns about NGS testing and the importance of ensuring validation and accountability. (The recent [U.S. Securities and Exchange Commission] investigation and court ruling of the private biotechnology company, Theranos might have some relevancy, but this case does not apply entirely.)8

As mentioned, successful incorporation of genomic technology into clinical practice hinges on the ability to provide tests that can accurately detect variants associated with a specific disease or condition for screening, prognosis, and treatment purposes. Important steps to ensure that such tests reliably provide accurate, meaningful data include analytic validation, clinical validation, and clinical utility. Accordingly, validation standards play a key role in ensuring safety and efficacy of NGS testing for patient care. Standards also act as basic guidelines to ensure comparability between different test centers, allow the exchange of experimental data to accelerate the innovation process, and aid improvement of transferability, transparency, and reproducibility of results.

Another important factor this question brings up is accountability. To accelerate discovery in precision medicine, all stakeholders involved in the delivery of patient care need to uphold trust and accountability. When participants and consumers submit their samples for genomic analysis, they need to be fully informed of the reasons for testing as well as potential risks and benefits involved. Genetic testing companies that use genomic data for alternative research and development purposes on top of the test requested must be fully transparent with patients. Progress in precision medicine will increasingly depend on establishing and strengthening trust between patients and all health care providers. If patient trust is lost, research and development in genomic technology will not prosper. 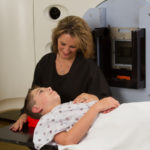