Scientists from the University of California, San Francisco (UCSF) said they have come up with a way to modify the genome without the use of viral vectors, a common delivery method used to introduce new genetic material into a cell.

With a propriety blend of T cells, corrective bits of DNA, and a CRISPR-Cas9 genome-targeting system, authors of an article published in Nature wrote that they were able to reprogram T cells to display new receptors after blasting them with an electrical current, which opens up the cell membranes temporarily.

In the study, the researchers used an N-terminal green fluorescent protein (GFP) following electroporation as a tag to gauge whether the cells incorporated the genetic material of interest. They found that GFP expression occurred in up to 50% of primary human CD4+ and CD8+ T cells.

Viral vectors can be extremely efficient at introducing new DNA sequences, Theo Roth, an MD/PhD student at UCSF and an author of the study, told Cancer Therapy Advisor. “The important distinction, though, is that this integration is normally random — the DNA is not integrated at a specific site in the genome. Our nonviral editing approach efficiently inserts new DNA sequences at specific sites.”

After demonstrating this nonviral genome engineering approach could work in primary human T cells, the researchers utilized 2 proof-of-principle models to test the ability of the engineered T cells to repair inherited mutations and to recognize cancer cells.

For the first application, the investigators used T cells donated from the Yale School of Medicine ― which originated from 3 children with monogenic primary immunodeficiency ― to see if they could correct a mutation in the IL2RA genes within these cells. Using their method, the team was able to correct the point mutation and trigger IL-2Rα expression on the surface of the corrected T cells. The researchers attributed the correction to the fact that they could deliver long double-stranded DNA (dsDNA) templates into the cells. Viral vectors are typically too small to transport large amounts of DNA.

Next, the researchers, in collaboration with colleagues from the Parker Institute for Cancer Immunotherapy at the University of California, Los Angeles, outfitted normal T cells with new receptors crafted to detect melanoma cells. When the receptors were injected into mice with human tumors, the receptors demonstrated anticancer activity.

While the researchers concluded there was no evidence of off-target effects, they also said “double-stranded templates could integrate independent of target homology, albeit at low rates.” These “rare events” could be reduced almost completely by using single-stranded DNA (ssDNA) templates instead of double-stranded ones, they added.

“While we can never be absolutely certain that there are no off-target effects, there is a crucial difference in the nature of this type of therapy, where a new gene is introduced at a specific site in the genome,” explained Roth. “Current FDA-approved CAR-T cell therapies rely on viral vectors that integrate DNA more or less randomly in the genome — by targeting a specific location to integrate, we think the potential for off-target effects will be reduced.” 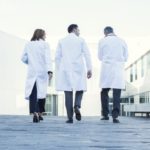 Progress Report in Cancer Control: How Are We Doing?