The amount of money spent on medical marketing in the United States has dramatically grown from 1997 through 2016, according to data from a study published in JAMA.1 The increase in direct-to-consumer (DTC) spending was partially attributed to the “shift toward advertising high-cost biologics and cancer immunotherapies.”

Study researchers reviewed several areas of medical marketing between 1997 and 2016, including the marketing of prescription drugs, disease-awareness campaigns, health services, and laboratory tests. They also reviewed action taken by the US FDA during that time period, such as fines and financial settlements.

Spending on medical marketing increased from $17.7 billion in 1997 to $29.9 billion in 2016. The most dramatic increase in spending was for direct-to-consumer (DTC) advertising, which was $2.1 billion of total spending (11.9%) in 1997 and $9.6 billion (32.0%) in 2016. An editorial accompanying the study described this as the “most striking” pattern of change in medical marketing to be identified by the study authors.2

Spending on DTC prescription drug advertising rose from $1.3 billion to $6 billion, the study authors wrote. The number of advertisements also increased from 79,000 in 1997 to 4.6 million in 2016.

This increase in DTC advertising by manufacturers “increases the need for clinicians to help patients understand product claims, medical need, cost, and nonmedical alternatives,” wrote the authors of the editorial.2 “Evidence that physicians have been either misled or otherwise persuaded to act based on fraudulent pharmaceutical marketing in recent decades, however, suggests that professionals may need further education or support to serve as the arbiter of deceptive marketing.”

Even though medical marketing for DTC advertising for drugs and health services increased substantially during the study period, pharmaceutical marketing to health professionals still accounted for the most spending, “and remains high even with new policies to limit industry influence,” the authors of the main study wrote. “Despite the increase in marketing over 20 years, regulatory oversight remains limited.”1

Some critics pointed out that once one accounts for inflation, the difference between the marketing spend by pharmaceutical companies from 1997 to 2016 is not as dramatic as it may appear. And, although marketing for prescription drugs and disease-awareness campaigns increased 60% during this period, total US drug spending increased as well — by 180%. This means that in actuality, drug marketing as a proportion of total US drug spending decreased from 14.7% to 8.2% during this period. 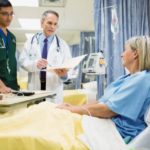 Malignant Pleural Effusion Interventions: What Matters Most to the Patient?