Triclosan is an antibacterial compound that is commonly found in many household items such as toothpaste, cosmetics, soaps, deodorants, plastic bottles, and pesticides.1 The triclosan concentrations found in these household products typically range from 0.1% to 0.3%. In addition to having antibacterial properties, triclosan is also considered a xenoestrogen based on its ability to bind to estrogen receptors and interfere with native estrogen binding.1 Other compounds, such as polychlorinated biphenyls (PCBs) and bisphenol A (BPA), have similar properties and have consequently been banned from production and use in certain products. Based on its pharmacological properties at the estrogen receptor and its detection in human blood, urine, and breast milk, there has been growing concern that triclosan could have carcinogenic properties.

Triclosan can be absorbed through the oral mucosa, gastrointestinal tract (GIT), and skin. Triclosan is typically cleared from the body within 24 hours, however, its elimination may be somewhat dose-dependent, with increasing doses leading to prolonged clearance.1 In addition, triclosan serum levels may be influenced by the route of administration. An example includes the increased levels of triclosan found in breast milk in people who applied triclosan-containing products to the axillary region.2

There are some in vitro data in breast and ovarian cancer cells lines to support the possibility of triclosan being oncogenic. As a xenoestrogen, triclosan can displace estradiol from its receptors and potentially increase exposure to estradiol, which has been a risk factor identified for the development of breast cancer.3 This mechanism also has been shown to play a role in the development of ovarian cancer in in vitro studies.4

In addition to in vitro data, there are also numerous animal studies that have linked triclosan to cancer. A recent study published by Yang and colleagues evaluated the effect of triclosan on colonic tissue.5 Different from the previously discussed estrogenic properties, this study showed that triclosan had a proinflammatory effect on the colonic mucosa by 2 mechanisms. First, triclosan was shown to activate the toll-like receptor 4 (TLR4) pathway, leading to increased production of inflammatory products. Second, triclosan was found to alter the gut microbiome in a way that promoted inflammation. Both of these mechanisms led to increased colitis and consequently colitis-associated colon cancer. 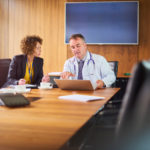