Gastrointestinal bleeding (GIB) is a common diagnosis leading to hospitalization in the United States1. Upper GIB has traditionally been defined as bleeding within the gastrointestinal tract that occurs proximal to the Ligament of Treitz.

The most common causes of upper GIB include peptic ulcer disease, varices, esophagitis, angiodysplasia, and erosive gastritis or duodenitis.1

Malignancy represents a far more infrequent, yet important, cause of upper GIB that should be included on the differential diagnosis in certain patients.

Previous studies have reported that between 1% and 5% of all upper GIB cases are secondary to malignancies.1,2,3

Upper GIB may be the initial clinical presentation for patients with previously undiagnosed malignancies in up to 80% of cases.1

Unfortunately, by the time these patients present to the hospital, up to 75% will already have metastatic disease. When identified, malignancies causing upper GIB are most commonly primary gastric cancers followed by primary esophageal and duodenal cancers.

Metastases from primary malignancies outside the upper gastrointestinal tract (GIT) are significantly less common, however they do occur. The most common primary sites of upper GIT metastases leading to upper GIB include melanoma, lung, pancreas, breast and colorectal.4,5

Endoscopy is frequently used to evaluate the etiology of an upper GIB and can often assist in making the diagnosis of a potential malignancy. 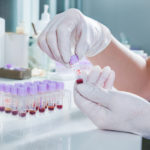