(HealthDay News) — Taking aspirin every day might lower a woman’s risk of developing ovarian cancer by one-fifth, according to research published in the February issue of the Journal of the National Cancer Institute.

Researchers from the U.S. National Cancer Institute analyzed data from 12 studies that involved nearly 8,000 women with ovarian cancer and close to 12,000 women without the disease to determine how the use of aspirin, other nonsteroidal anti-inflammatory drugs (NSAIDs), and acetaminophen (Tylenol) affected the risk of ovarian cancer.

“Our study suggests that aspirin regimens, proven to protect against heart attack, may reduce the risk of ovarian cancer as well,” Britton Trabert, of the National Cancer Institute’s division of cancer epidemiology, said in a U.S. National Institutes of Health news release.

“However intriguing our results are, they should not influence current clinical practice,” she added. “Additional studies are needed to explore the delicate balance of risk and benefit for this potential chemopreventive agent, as well as studies to identify [how] aspirin may reduce ovarian cancer risk.” 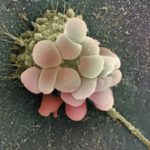