The incidence of distant-stage cervical cancer in the United States increased by 1.3% per year from 2001 to 2018, according to data published in the International Journal of Gynecologic Cancer.

Researchers explored the incidence of stage IV cervical cancer, and factors linked with such incidence, using data from the US Cancer Statistics program.

Black and Hispanic patients were more likely to be diagnosed with distant-stage cervical cancer than were White and Asian patients. The age-adjusted incidence was 1.55, 1.01, 0.92, and 0.67 cases per 100,000 individuals, respectively (P <.001).

The incidence of distant-stage cervical cancer increased over time for most racial/ethnic groups. The average annual percent change (AAPC) was 1.30% overall, 1.67% in White patients, 0.61% in Black patients, 0.22% in Asian patients, and -1.06% in Hispanic patients.

The researchers also found that HPV vaccination and non-guideline Pap screening increased over time for all groups analyzed.

The AAPC of non-guideline Pap screening was 7.0% overall, 8.2% in Black patients, 7.1% in White patients, and 5.8% in Hispanic patients. Data were not available for Asian patients. 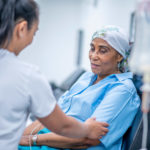