An epigenetic cervical cancer test outperforms Pap or human papillomavirus (HPV) test-based screening, according to findings from the HPV FOCAL trial, published in the International Journal of Cancer.1

The “S5” methylation test detected epigenetic aberrations indicative of cervical cancer and had a 100% detection rate in the study, correctly identifying all 8 of 15,744 screened women who had developed cervical intraepithelial neoplasia grade 2 (CIN2) or worse, compared with a 50% detection rate through the use of HPV testing and a 25% rate following a Pap test.1

“This is an enormous development,” said senior study author Attila Lorincz, PhD, of Queen Mary University of London’s Wolfson Institute of Preventive Medicine, in a press release.2 “We’re not only astounded by how well this test detects cervical cancer, but it is the first time that anyone has proven the key role of epigenetics in the development of a major solid cancer using data from patients in the clinic.”

Epigenetic aberrations might be a more important factor in the progression of many malignancies — including cervical, colorectal, prostate, and oropharyngeal cancers — than are DNA mutations, Dr Lorincz said.

Dr Lorincz was also involved in the development of the HPV test in 1988. That test is more accurate than traditional Pap test analysis — but it only confirms whether or not a woman has been infected with a high-risk strain of HPV. The new test detects epigenetic changes to cervical cells indicative of tumorigenesis.

The HPV FOCAL trial screened Canadian women aged 25 years to 65 years. The epigenetic test detected early-stage cervical cancers years before they would have become symptomatic, including adenocarcinomas, which have proved to be difficult to detect using other screening tests, Dr Lorincz said. 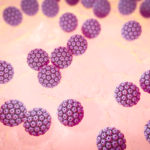