A 6 gene-expression profile was found to be capable of discriminating between those patients with locally advanced nasopharyngeal cancer (LA-NPC) likely to benefit from induction chemotherapy prior to chemoradiation therapy vs not, according to findings published in the Journal of the National Cancer Institute.

Of the 769 pretreatment tumor specimens of LA-NPC analyzed in this study, 342 were from patients assigned to a training cohort, whereas 187 and 249 were included in a clinical trial validation cohort (ClinicalTrials.gov Identifier: NCT01245959) and an external independent validation cohort, respectively. All 769 patients had received concurrent platinum-based chemoradiation therapy, with docetaxel, cisplatin fluorouracil-based induction chemotherapy also administered to 387 (50.3%) of these patients.

Data regarding clinical outcomes were available for all patients with a median follow-up of 62.2 months, 60.8 months, and 41.8 months for those assigned to the training, clinical trial, and external independent cohorts, respectively.

Following gene-expression profiling analyses of tumor samples, a gene-expression signature involving 6 genes was identified that was predictive of short-term tumor response and failure-free survival in the subgroup of patients treated with induction chemotherapy.

In addition, in an analysis including all patients in the training cohort in which those who achieved benefit from induction chemotherapy were separated from those who did not, the 6-gene expression profile was shown to discriminate with respect to failure-free survival between those who received induction chemotherapy vs not in the benefit group (hazard ratio [HR], 0.54; 95% CI, 0.34-0.87; P =.01), but not in the no-benefit group (HR, 1.25; 95% CI, 0.62-2.51; P =.53).

Similar findings were also observed in both validation cohorts.

In their concluding remarks, the study authors noted that “the 6-gene signature can aid clinicians in identifying [induction chemotherapy] beneficiaries and tailoring therapeutic regimens according to individual tumor biology.”

However, they cautioned that this gene-expression signature was developed and evaluated only in the setting of docetaxel and cisplatin fluorouracil-based induction chemotherapy, and that it “needs to be confirmed in large-scale multinational prospective studies before it can be used in the clinics.” 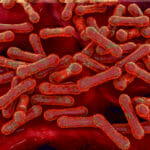 Intratumoral Bacteria Could Be Used to Predict Outcomes of Nasopharyngeal Carcinoma