Neutrophil-to-lymphocyte ratio (NLR) may be a strong predictor of overall survival in oral, pharyngeal, and laryngeal squamous cell carcinomas, according to a recent study published online in the journal Head & Neck.1

Researchers led by Saleh Rachidi, BS, of the Medical University of South Carolina in Charleston conducted a retrospective study of pretreatment neutrophil and lymphocyte counts as well as NLR in correlation with overall survival in patients with head and neck cancer.

They found that patients in the highest tertile of neutrophil count as well as those in the lowest tertile of lymphocyte count were associated with shorter survival than the rest of the examined population.

In addition, NLR was found to be lower among patients with human papillomavirus (HPV)-positive tumors compared to those with HPV-negative tumors, and it was also predictive of survival in both types. 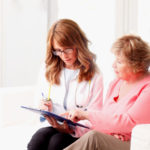 Survivors of Retinoblastoma Do Not Have Worse Psychosocial Functioning