Therapy-related acute myeloid leukemia (t-AML) among patients who had received treatment for lung cancer resulted in short overall survival (OS) and was associated with small cell histology, localized or regional stage disease, and chemoradiation therapy, according to a retrospective study published in BMC Cancer.

Although rare, t-AML is a known potential complication associated with lung cancer treatment. However, its characteristics, risk factors, and associated survival have not been well studied. The purpose of this study was to identify the clinicopathologic features of t-AML among patients with lung cancer.

The retrospective study analyzed data from 104 patients who developed t-AML after lung cancer treatment in the Surveillance, Epidemiology, and End Results (SEER) database. Patients had been diagnosed with t-AML between 1975 and 2015.

There were also 158,541 patients with lung cancer not diagnosed during the same time frame with t-AML included in the study.

Baseline characteristics were similar between the study groups, except more patients in the t-AML group underwent surgical treatment, radiation treatment, and had localized/regional stage disease compared with patients who did not develop t-AML. The median age of patients at lung cancer diagnosis was 63 years, 54% of patients were male, and 83% were white. 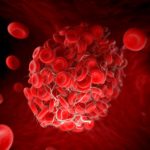