Results of a large retrospective cohort study of allogeneic stem cell transplantation (allo-SCT) in patients with acute myeloid leukemia with myelodysplasia-related changes (AML-MRC) compared with those with AML-not otherwise specified (AML-NOS) showed a heterogeneous range of post-transplantation outcomes in the former group. The findings from this study were published in Biology of Blood and Marrow Transplantation.

AML-MRC is a distinct AML entity according to the 2016 WHO classification system of AML. It is defined by the presence of multilineage dysplasia (MLD), and/or a history of myelodysplastic syndrome (MDS) or MDS/myeloproliferative neoplasm (MPN), and/or cytogenetics characteristics of MDS. Although results of previous studies have shown worse survival of patients with AML-MRC compared with those with AML-NOS, outcomes following allo-SCT, as well as disease-related factors associated with these outcomes, have not been well characterized.

Patients in the AML-MRC subgroup were a median age of 56 years, were more likely to be older, male, and to have worse performance status, and less likely to have achieved a complete remission (CR) prior to transplantation compared with patients in the AML-NOS subgroup. In addition, the time period from diagnosis to transplantation was significantly shorter for patients with AML-MRC (170 days vs 234 days, P <.001).

Interestingly, however, multivariate analyses of the cytogenetic subgroups of patients in the AML-MRC subgroup showed improved OS for patients with MLD-solo compared with the AML-NOS cohort (HR, 0.81; 95% CI, 0.71–0.94; P =.005).

Based on these results, the study authors stratified the AML-MRC cohort into 3 risk groups: low risk=MLD-solo; history of MDS or MDS/MPN, isolated -7/del(7q), other unbalanced and balanced abnormalities; intermediate risk=CK group, and isolated -5/del/(5q); and high risk= MK group.

those patients should be carefully reviewed,” the authors wrote.

Other factors shown to be independently associated with worse survival in patients with AML-MRC following allo-SCT were older age, poor performance status, and at least 5% blast percentage in peripheral blood. Interestingly, in the AML-MRC cohort, grade 1/2 acute graft-versus-host-disease (aGVHD) was associated with improved survival, whereas the OS of those developing grade 3/4 aGVHD was worse, compared with those who did not develop aGVHD.

Some of the study limitations identified by the authors included the absence of data on genetic mutations that could have the potential to refine disease defined as MRD-solo, possibilities for selection bias, and gaps in data related to treatments administered prior to and following allo-SCT.

In summarizing the results of their study, the authors noted that their “prognostic risk

stratification can potentially aid in elucidating the diverse transplantation outcomes in

patients with AML-MRC. Performing allo-SCT at the appropriate time while taking into

consideration the disease status, clinical condition of the patient, donor source, and

controlling aGVHD can potentially improve outcomes in patients with AML-MRC.” 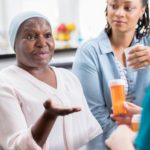 Clinical Outcomes in Philadelphia-Negative ALL With Inotuzumab Ozogamicin Plus Chemotherapy