According to research published in the Journal of Clinical Oncology, blinatumomab induction and consolidation therapy followed by prednisone, vincristine, 6-mercaptopurine, and methotrexate (POMP) maintenance chemotherapy appears to be well tolerated and efficacious in older patients with Philadelphia (Ph) chromosome-negative B-acute lymphoblastic leukemia (B-ALL).

Researchers conducted a phase 2 trial of patients treated with the anti-CD19 bispecific T-cell engager antibody blinatumomab and POMP at National Clinical Trial Network sites between June 2015 and September 2017 (ClinicalTrials.gov Identifier: NCT02143414). Patients were eligible to participate if they were 65 years of age or older and had newly diagnosed Ph chromosome-negative B-ALL. The primary objective was estimated 3-year overall survival (OS).

The study included 29 eligible patients (76% male and 24% female), with a median age of 75 years (range, 66-84). The median baseline bone marrow blast count was 87%, Poor cytogenetic risk and the Ph-like ALL gene signature were reported in 34% and 36% of patients, respectively.

The overall response rate (CR + CRi) was 66% (95% CI, 46-82). No significant differences were observed in CR rates between patients with poor-risk cytogenetics (70%) and those with standard and good-risk cytogenetics (59%; Fisher’s exact P =.69). Among patients with Ph-like ALL, 60% (3/5) achieved CR and minimal residual disease (MRD) negativity. Among all responders with MRD data, 92% (12/13) achieved MRD negativity.

“The 3-year disease-free survival and overall survival results are encouraging and suggest that this approach should be further explored,” wrote the authors. “In the future, treatment is likely to include combinations of multiple novel agents, but clinical trials will be needed to determine the best approach for each subset of patients.” 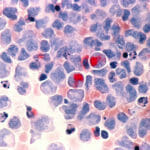